Posted at 16:42h in Remediation by Warren Brand 0 Comments
0 Likes

I am intimately familiar with the fine art of “eye-rolling.” As the followers of my blog know, I have three daughters, ages 16, 19 and 22.

As you can imagine, I’ve had more than my share of eye-rolling exhibitions over the years. The following is only the briefest of lists leading to the aforementioned eye-rolling:

I was not, however, expecting to encounter this facial gesture during a meeting discussing remediation of a catastrophic coating failure on a very large concrete secondary containment area. 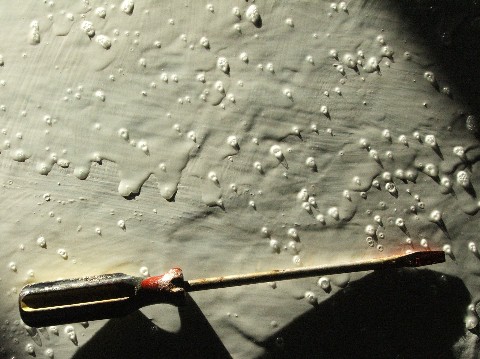 This is an example of the blistering that comes with outgassing, although much smaller than what we saw on the project discussed here. Photos in this blog post are not from the project described.

A multi-coat polyurea system had been installed and was peeling, bulging and otherwise failing sporadically throughout this containment area. And it appeared that the failure was slowly progressing. One day a coated wall would look perfectly normal, and then a few days later, a two-foot-diameter blister filled with water would appear.

The mode of failure was complex and varied, but mostly characterized by debondment, both adhesively and cohesively within various coats.

In some cases, there were blisters of 2 feet and 3 feet in diameter, some filled with water and some not. There were sections where you could literally grab a chunk of coating and pull off a section 3 feet wide by 10 feet long.

While we weren’t hired to conduct a failure analysis we presumed that the existing coating fell victim to outgassing and other issues while curing.

While we would expect to see blistering from outgassing, we surmised that the coating (which had less than 40 percent elongation and which was applied at between 40 and 60 mils) simply got hard before having a chance to create small, discrete blisters, and instead forced the coating off in large sheets or very large blisters.

In our repair design, we suggested using a completely different material with more than 400 percent elongation.

We would identify those areas within the containment area where the coating was sound and well adhered, and remove those areas that were bad.

We would apply the new material to the exposed concrete and roughly 6 inches over the existing, well-adhered material.

We specified wet abrasive blasting on all exposed concrete to an ICRI 6 to 8 and provided the contractor with profile chips as comparators. The existing coating would be lightly abraded.

And here’s where the eye-rolling came in.

Part of our site-specific application specification required that the new material be applied to all properly prepared concrete “…in declining surface temperatures.”

We explained that outgassing was a very serious concern (as we believed that’s what led to the current failure), particularly since there was no vapor barrier installed behind the concrete when built.
The applicator was patient but was struggling to keep his eyes level. This temperature requirement would be logistically difficult. It was the dead of summer—a particularly hot one in the Chicago area—and the surface temperature could literally change as clouds passed overhead and hid, or exposed, the sun.

Our specification necessitated that the contractor work in the late afternoon, as the sun was setting, and, further, actually use an IR thermometer to document the declining temperatures of the surface. (The surface temp didn’t matter when overcoating the existing polymer.)

Now, there are many other times when I’ve experienced the eye-rolling phenomenon, and, I must admit, when I have participated as well. Two cases in point: the cold wall effect and chloride contamination (SCAT testing). While I believe these are real, I think they are highly overrated and take the blame for far more failures than they actually account for.

But outgassing is a clear and present danger whenever painting, coating or tiling concrete, particularly outside in changing temperatures, and particularly if no waterproof membrane was installed or applied to the backside.

The Ins and Outs of Outgassing

These interconnected capillaries allow water vapor and air to pass through, often all the way through, the concrete slab depending on the formulation and thickness of the concrete. As the concrete surface cools, the concrete will “breathe” in, absorbing air and humidity. As concrete warms, it will “exhale.”

Just a few weeks earlier, the area had been hit by a substantial rainstorm. My home office was hit hard and the rain dampened the floor of our furnace room, a harmless, yet annoying event not uncommon during torrential Chicago rainstorms.

When I went to clean up the puddle, I noticed bubbling from the concrete. Being the material and technical nerd that I am, I immediately grabbed my phone and videotaped this outgassing phenomenon.

It was fascinating to watch the outgassing from various points in the concrete floor change in frequency and location as time went on. All the eye-rolling in the world couldn’t stop it.

Meanwhile, back at the ranch (aka, the secondary containment area), we were hired to assist in developing a proof of concept (POC), and did so on two separate occasions.

We were going to evaluate surface preparation and the use of a moisture-tolerant primer in conjunction with the elastomeric topcoat. We were also going to perform destructive (adhesion) tests and non-destructive tests as well.

The first POC went well and as anticipated. We were not on site for the second one, however.

When we came back to inspect the second POC, the area was completely and utterly blistered—like the top of an overcooked cheese pizza.

I couldn’t figure out what had gone wrong until one of the technicians sheepishly told me that they applied the materials in direct sunlight during rising temperatures. They simply weren’t convinced that outgassing was a thing—and the blisters were the proof.

And all the eye-rolling in the world couldn’t change it.

We examined (cut open) a number of these blisters and found that the overall coating system remained intact as a continuous waterproof membrane. The bubble had formed within the top layer, cohesively as it were, but didn’t go through to the substrate.

Although we determined both POCs were intact, both were removed prior to project completion.