Posted at 13:58h in Technology, The CCG Way by Warren Brand 0 Comments
0 Likes

Inspection of the Iconic Crown Fountain by Drone

Embracing technology – just because you can, doesn’t necessarily mean you should.

I’ve been waiting for an opportunity to use a drone for something or another for at least a decade. I’m an early adopter of technology (particularly all things Apple), but I’m also very finicky. That is, the technology must be functional. It must work in some fashion to either further a larger goal within a system (i.e. a component on the space shuttle) or add value in some other way, either functionally or in terms of quality of life (like my Apple watch).

Albert Einstein had a deeply profound saying which is one of the guiding principles of Chicago Corrosion Group and our unique vendor-neutral consulting model, “Everything should be made as simple as possible, but not simpler.”

I remember about a decade ago, while attending a professional conference on corrosion, and chatting with a number of raw material suppliers for the paint and coatings industry. These individuals would be the equivalent of steel or aluminum producers for auto makers or aerospace, so they didn’t produce finished products, rather they made the base products that are used by all paint and coating companies.

I had brought up to the group of five or so how amazing it was that new products were coming out all the time, and I asked, “How new are these products really?”

They all kind of chuckled and started to try to explain these “new” characteristics.

I finally said, “Do you know what would happen to the industry if no new products were introduced for the next 20 years?” They all looked at me expectantly, before I responded, “Nothing. Not a darn thing.”

They were not pleased – but my comment and observation was apt. The “newness” of these various products, from my perspective, did not necessarily fall into the category of what most people would think of as new and, more importantly, there was an implication that ‘new’ correlates with ‘better’ – which we all know is sometimes the case, but not always.

In the consumer world, it’s up to consumer to heed the ancient phrase “caveat emptor” (buyer beware). In the industrial and commercial world, it’s up to the owner to do the same – or, alternatively, hire those with the technical background and high level of integrity to protect their interests and resources.

Case in point: CCG had been evaluating issues associated with all of the various systems associated with The Crown Fountain in Millennium Park. Most areas were accessible, but evaluation of the roof proved challenging.

Of course there was a roof hatch, accessible from the interior of the towers, and usable for sticking your head out and peering around, like a tentative baby bird peering out of its nest, but climbing out onto roof was dangerous, and use a manlift to get above the 50’ towers, was prohibitive due to the cost and the weight constraints of the relatively delicate pavers at the base of the feature.

This brings me to the coolest text I ever sent: “Hey Dan, did you contact the team about the schedule for the upcoming drone inspection?”

Send in the Drones:

Drones are increasingly newsworthy nowadays, and I’ve been fascinated with them for decades. In fact, several years ago I was speaking at a conference for chemical manufacturers and suppliers – this was one of only a handful of times when I showed up late to an event, however the FBI kindly agreed to switch slots with me. This allowed me to open my speech with, “I’m not sure how everyone got the time wrong with my speech, but I’m glad you all got it figured out.” The the crowd at first was silent, and then laughed – saving me from additional humiliation.

The FBI presentation was fascinating and specifically dealt with how chemical companies should start to be aware of threats from drones. The talk was mostly about awareness, and some very cool technology to physically interdict drones, using various devices.

Back to the Crown Fountain, we had finally found a perfect use for a drone that would cost our client a small fraction of any other alternative in terms of inspection value – and provide exactly the type of data we needed. 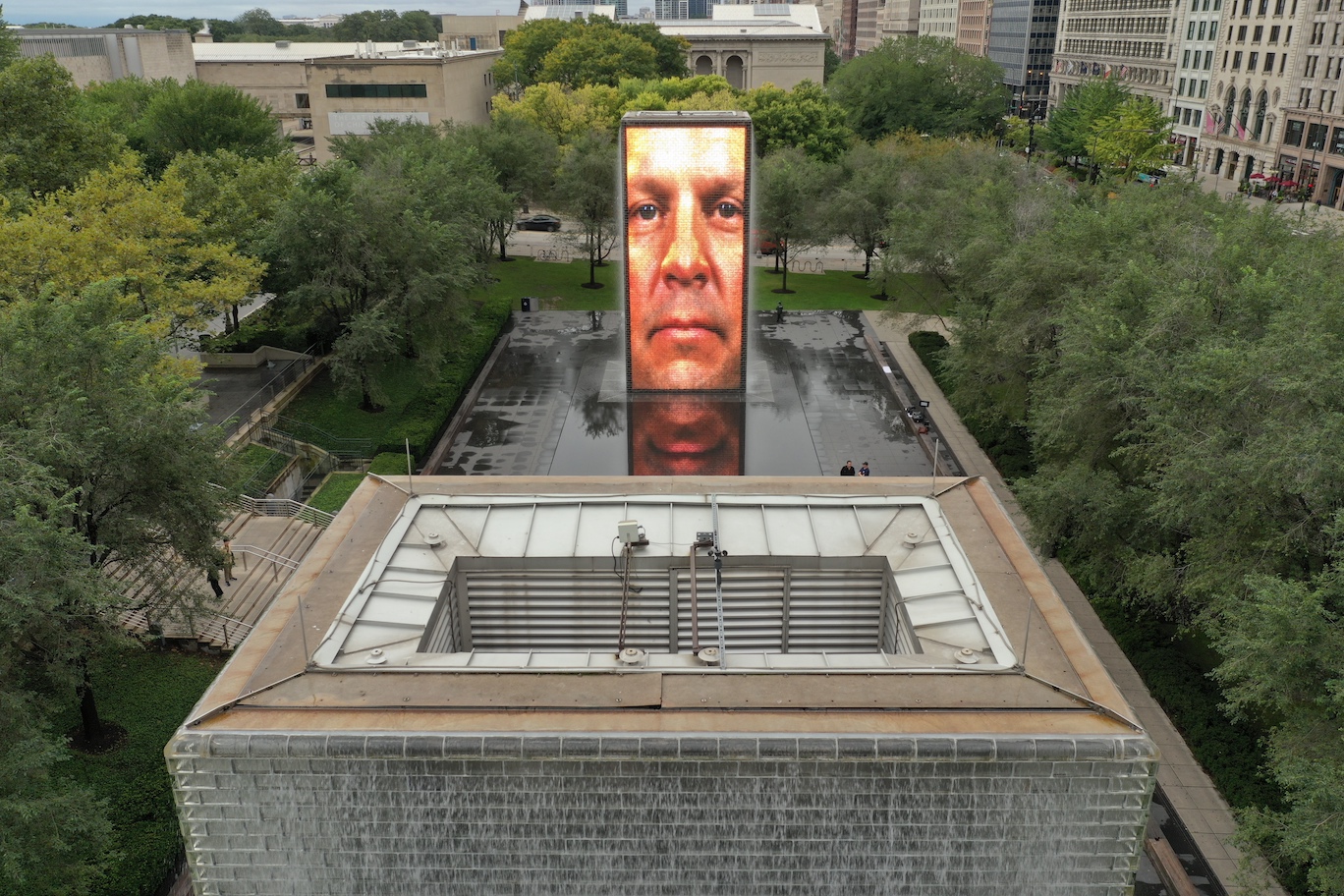 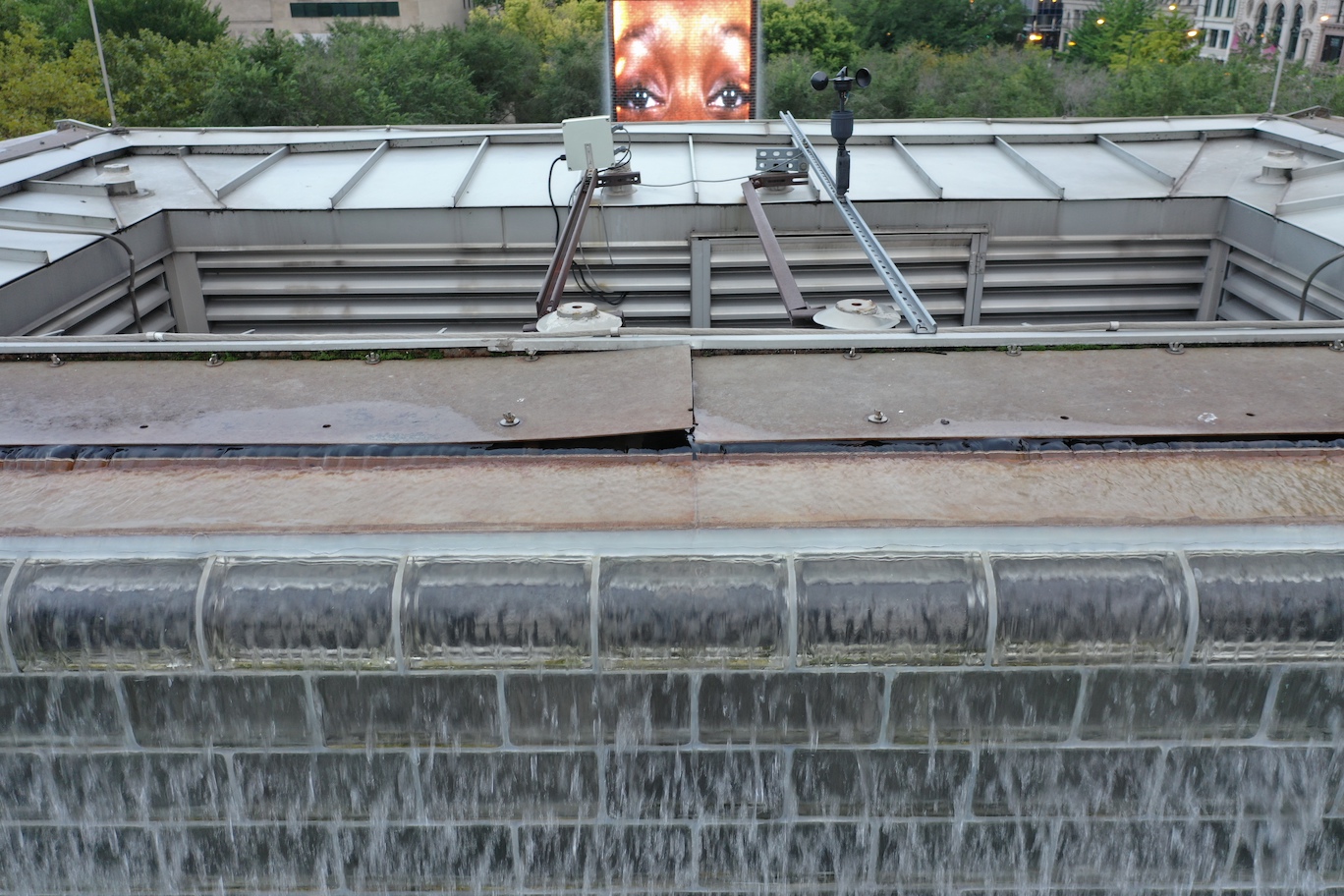 The state of the art of drones is simply mindboggling. Our pilot (yes, a pilot who was required to hold an FAA license) was one of the first drone pilots in the Midwest, and whose skill was sublime (see picture of author with drone hovering nearby). I asked him how many times a drone had failed in the past decade. He said only a handful, and none in the past several years, as drone technology has improved exponentially.

In addition to the mechanical reliability, the cameras and internal stability of the drones provided a platform as solid as if the camera was mounted on a tripod on the ground.

There are few things more professionally satisfying to me then when CCG can bring new technology to a client which provides unique value and saves substantial resources. And this was one of them.

Use of the drone saved the client a small fortune. And it was safe. No one was 50’ in the air, and tethered to a lift. No one had to try to move a lift around the base of the fountain, on the delicate pavers. And it was fast. The survey of both towers took less than two hours. And the deliverables, photos and videos, were better quality than any hand-held camera from a lift or scaffolding.

Einstein would have been proud.